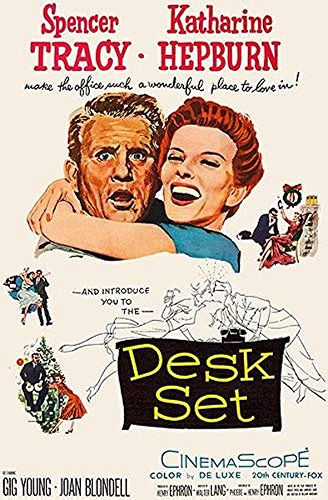 In honor of “Love Your Library” month, the Friends of the Mercer Public Library will sponsor two afternoon movies this month.

Join us on Monday, February 6 at 2:00 p.m. for “Desk Set.” This 1957 film is a cult favorite among librarian and stars Katharine Hepburn and Spencer Tracy. Bunny Watson (Hepburn) is in charge of the reference library at the Federal Broadcasting Network when efficiency expert Richard Sumner (Tracy) is brought in to install an EMERAC, a massive early computer. Sparks fly as the reference librarians worry about their jobs, Bunny learns to control the machine, and Bunny’s longtime romantic partner suddenly wants to commit now that Sumner is on the scene. Though “Desk Set” may not be as rich as some of Tracy and Hepburn’s other work, critics called it “cheerful” and “refreshingly smart.”

This event is free and open to the public, and popcorn will be provided! For more information, call the library at 715-476-2366.