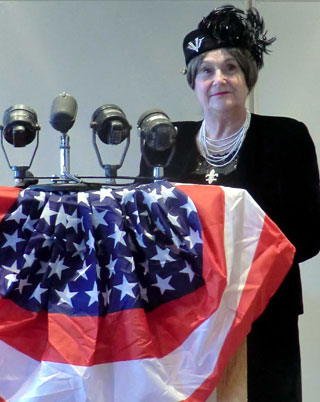 Join us for a performance of “Eleanor Roosevelt: First Lady of the World” by award-winning historical performer Jessica Michna on Sunday, July 31 at 1:00 p.m. in the Mercer Community Center.

Michna last visited the Mercer Library in 2021, when she portrayed Helen Keller. The Friends of the Library are pleased to welcome her back to represent another iconic figure in American history.

Eleanor Roosevelt will share with the audience her tragedies and triumphs. Born into the opulent wealth of America’s “Golden Age,” she would grow from the shy, homely orphan into a confident, driven woman. Annealed by personal tragedy, she would emerge as a champion of civil rights, author, and stateswoman. Eleanor has been characterised by many as our most respected First Lady. She is best summed up by President Harry S. Truman, who dubbed her “The First Lady of the World.”

Originally from Pennsylvania, Jessica Michna developed a love of history at an early age. She and her family visited the many historic sites throughout America. Her school years would find her appearing in various productions, in addition to costume design and construction. Upon graduation several scholarships were offered to further her studies in theater arts. She would opt to earn a degree in psychology from the UW system working several years as a researcher and lecturer.

Her love of theater and history would eventually bring Jessica to found her company, “First Impressions”. Since its founding in the year 2000, Jessica has expanded her repertoire to include seventeen historic figures. In 2016 she was awarded the Presidential Service Center’s Distinguished Service award for her riveting portrayals of First Ladies. While she has appeared before a wide range of audiences, including appearances at the National Churchill Museum, the Lincoln Boyhood Home National Site, and Valley Forge, Jessica is particularly fond of performing for senior groups and communities. The life experiences of those in her senior audiences enhances her understanding of life stories. She often reminds her audiences that everyone has a history and encourages them to record their own life stories. “History is not a litany of which general died under which tree. It is the story and life experiences of each human life.”

This event is sponsored by the Friends of the Mercer Public Library. For more information, call the library at 715-476-2366.